The end of 19th century style of commercial communication may perhaps make us smile today, but it reveals a keen awareness of the human soul and a frank immediacy, which have little to envy of the multimedia interaction of our days.

When – like all large companies in the late nineteenth and early twentieth centuries – Generali also began to make use of advertising, it developed a wide variety of promotional materials, including postcards, brochures, pamphlets and booklets (stories, diaries, etc.), to illustrate its business and range of insurance products. Over time, from "small business advertising" (well described by Pietro Egidi in his essay entitled Small-scale Corporate Communication. Brochures, Small Volumes, and Leaflets from the Historical Archive (1883–1973), published in Generali in History. Tales from the Archives. Twentieth Century ), there was a transition to newspapers, passing through dioramas and mechanical puppet shows – innovative 3D miniatures, with or without animation and lighting – which Generali used in the years between 1930 and 1940 and which testify to an intermediate evolutionary stage of product communication before the arrival of film and television spots.

One of the most original choices of communicating to the outside world was that used to present the results of the life insurance branch at the Barcelona International Exposition of 1929: a chart scale model (real 3D graphic) illustrating almost a century of development of the Company.

The business trend over time was represented by dolls covered in cloth produced by the renowned Turin factory named Lenci (acronym for "Ludus Est Nobis Constanter Industria"). There were eighteen dolls in all, which were of increasing size and each placed on a commensurate pedestal bearing the indication of a reference period, normally five years (but in some cases even more). To further emphasise the link with the period represented and make the representation even more appealing, each doll was also dressed in line with the fashion of the period represented.

The charming dolls have survived only in a photographic reproduction of “Il Gazzettino illustrato”, a weekly insert that accompanied "Il Gazzettino" – the historic and still existing Tre Venezie daily newspaper – from 1921 to 1941. In 1929, in fact, through a direct circular to its main agencies, the Veneto Head Office communicated that the magazine would shortly send them some copies of issue 27 of July 7. Inside the weekly, one page was dedicated to photographic reproductions of the "chart scale models, sketches and graphic paintings" presented by Generali that year at the Barcelona Expo to advertise its business (the same drawings and statistics had been also presented in a pamphlet published by Generali in Spanish and curated by C. Rosmann). The circular invited the agencies to give visibility to the page of the newspaper, displaying it in their offices. Visual communication was considered to be much more effective than the annual printed financial statements to show the public "the impressive extent of the Company's real estate assets, the formidable development of its operations in all branches and the huge damages paid by it". 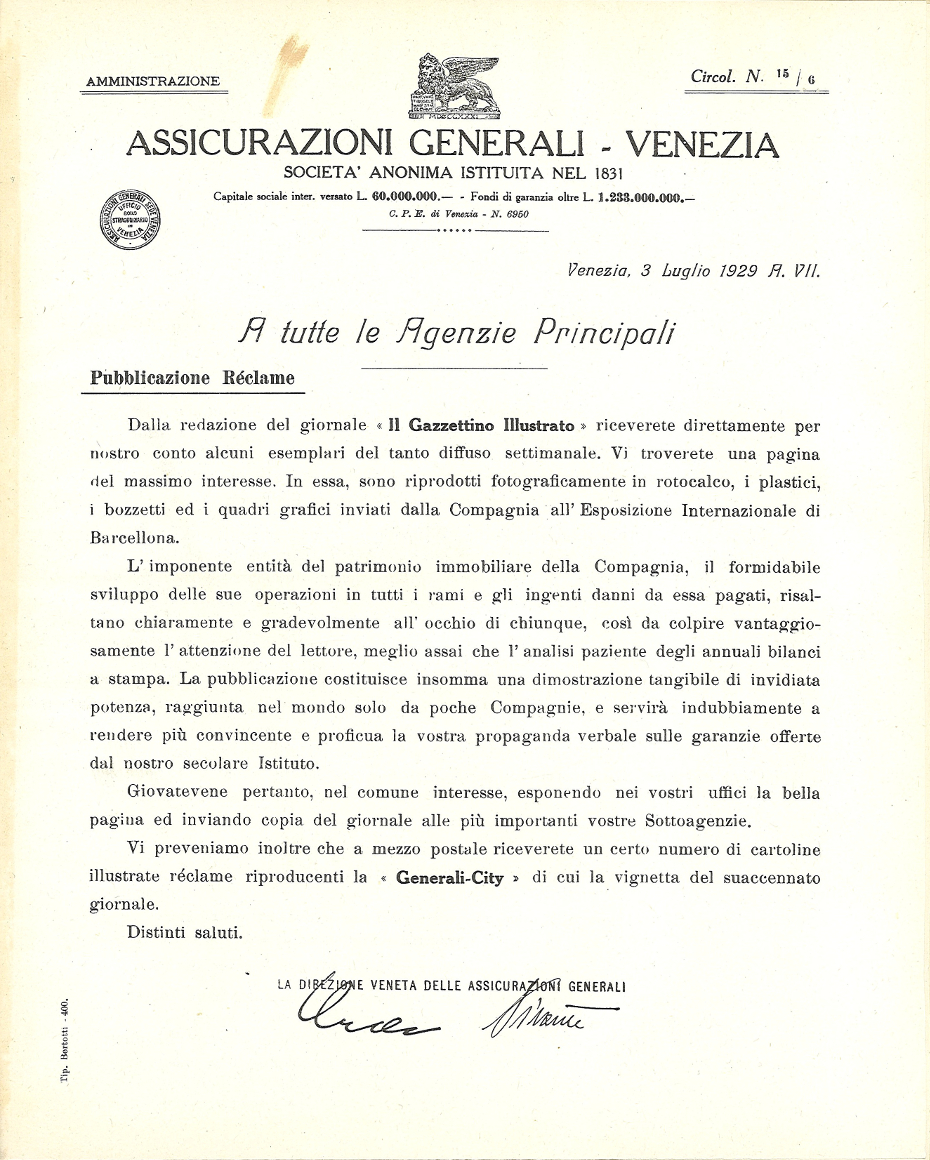 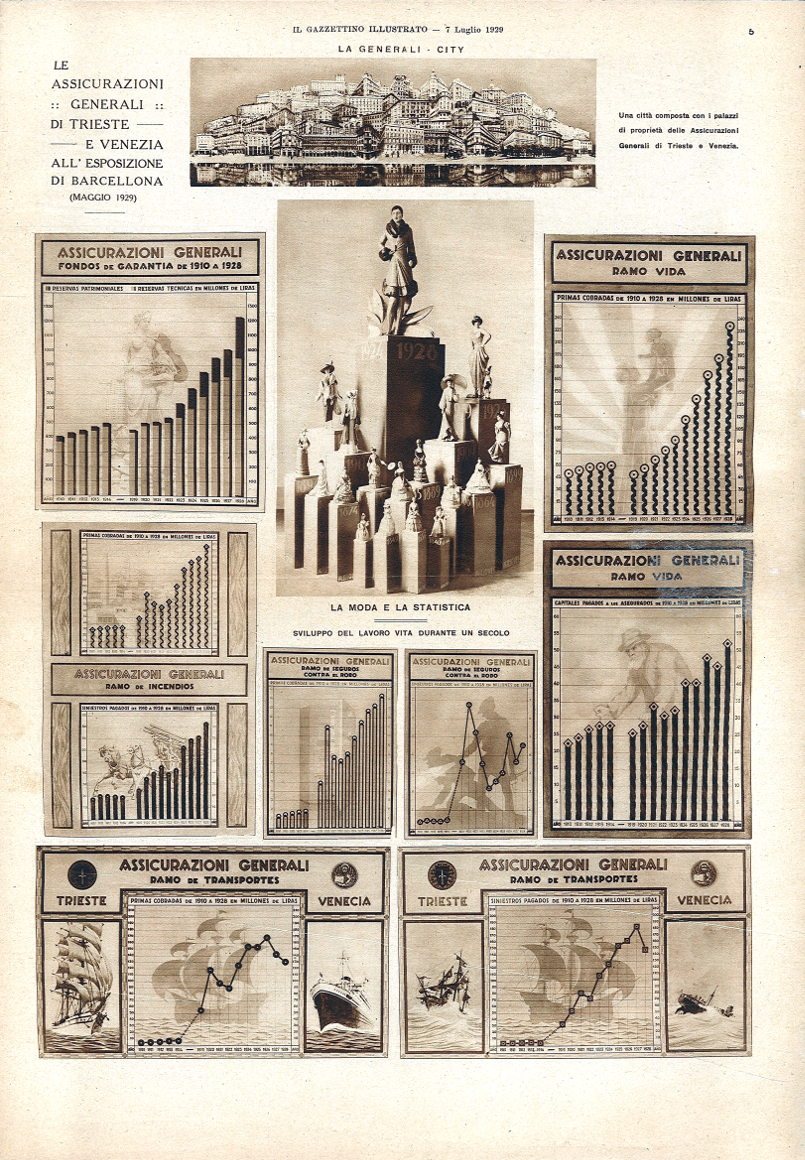 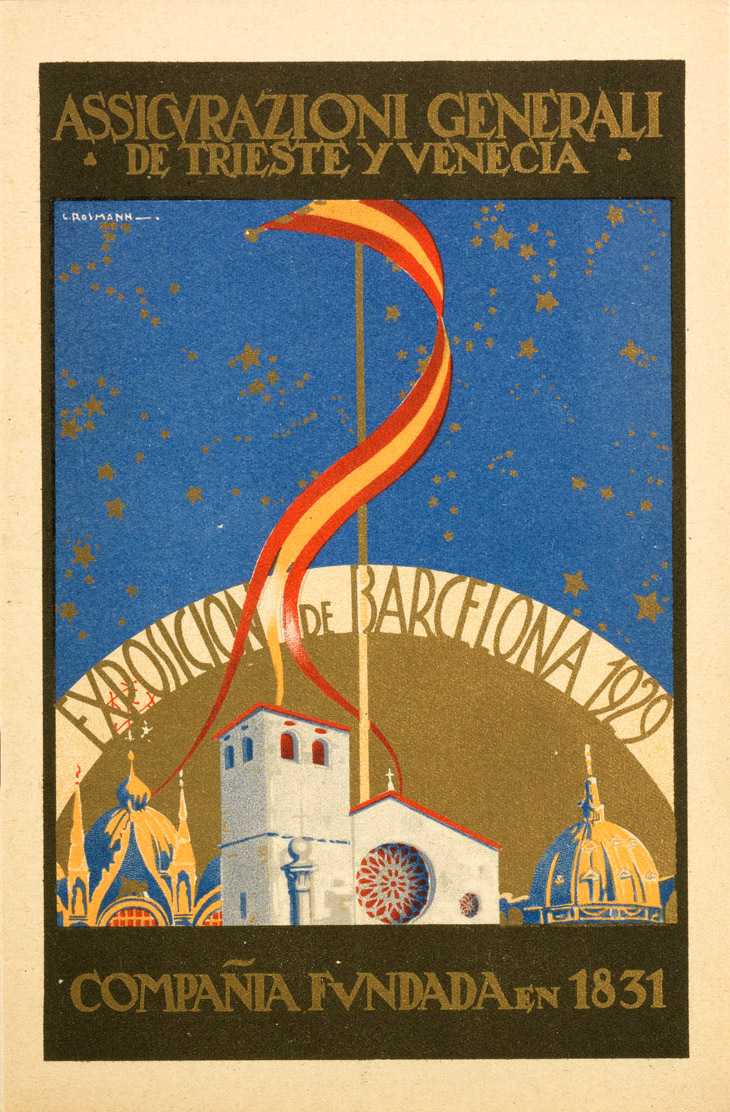