Propaganda and life – insurance, that is – on the stage!

“We don’t promote a product, we promote an idea” – the words of Napoleone Giuseppe Fiumi (b. London 1898, d. Trieste 1948), a Generali employee and well-known portrait artist, engraver and illustrator, in a 1941 article published in the company magazine, the Bollettino. His remarks referred to advertising’s social function of "making people think" and, in particular, the company’s responsibility for promoting the concept of social welfare.

Starting from the premise that an advertising message achieved effectiveness by simplicity, clarity and elegance, Fiumi believed that bright and lively advertising was the key to success. In this respect, he mentioned a lighted picture that resembled a fire, and which could make a greater impact than a standard wall poster - did he perhaps have in mind the diorama created by the Trieste designer Giacomo Rossi junior (1894-1944)? Though it has been lost, the Generali Historical Archive holds some clues to the diorama’s appearance. Over the years, black and white photos of four dioramas have come to light, depicting the main insurance areas of life, transport, fire and theft. In one of them, depicting a road accident, it is just possible to make out a nameplate inscribed “G. Rossi teatro Verdi Trieste”. Rossi and his father (Giacomo senior, 1865-1930) belonged to a dynasty (del Rosso, Rossi) of skilled set designers who worked for important cultural institutions such as the Vienna State Opera, the La Fenice Theatre in Venice and the Giuseppe Verdi Municipal Theatre of Trieste, where Rossi's son Mario (1920-1986) served as scenic director for long period. In addition to working in the world of Trieste theatre for almost forty years, Rossi himself also won major orders to design dance halls and advertising displays. The diorama representing fire insurance offers a fascinating glimpse of Trieste prior to demolition work in the Old City between 1934 and 1938, and of the passageway from Piazza Unità d'Italia to the Cavana district, which crosses what is now called Via Pozzo del Mare. It is possible to make out simplified profiles of the Brigido and Leo buildings and the little Church of San Rocco and San Sebastiano. The designer’s interest in these areas of the city is also evident in various studies and sketches conserved at the Carlo Schmidl Theatrical Museum of Trieste. 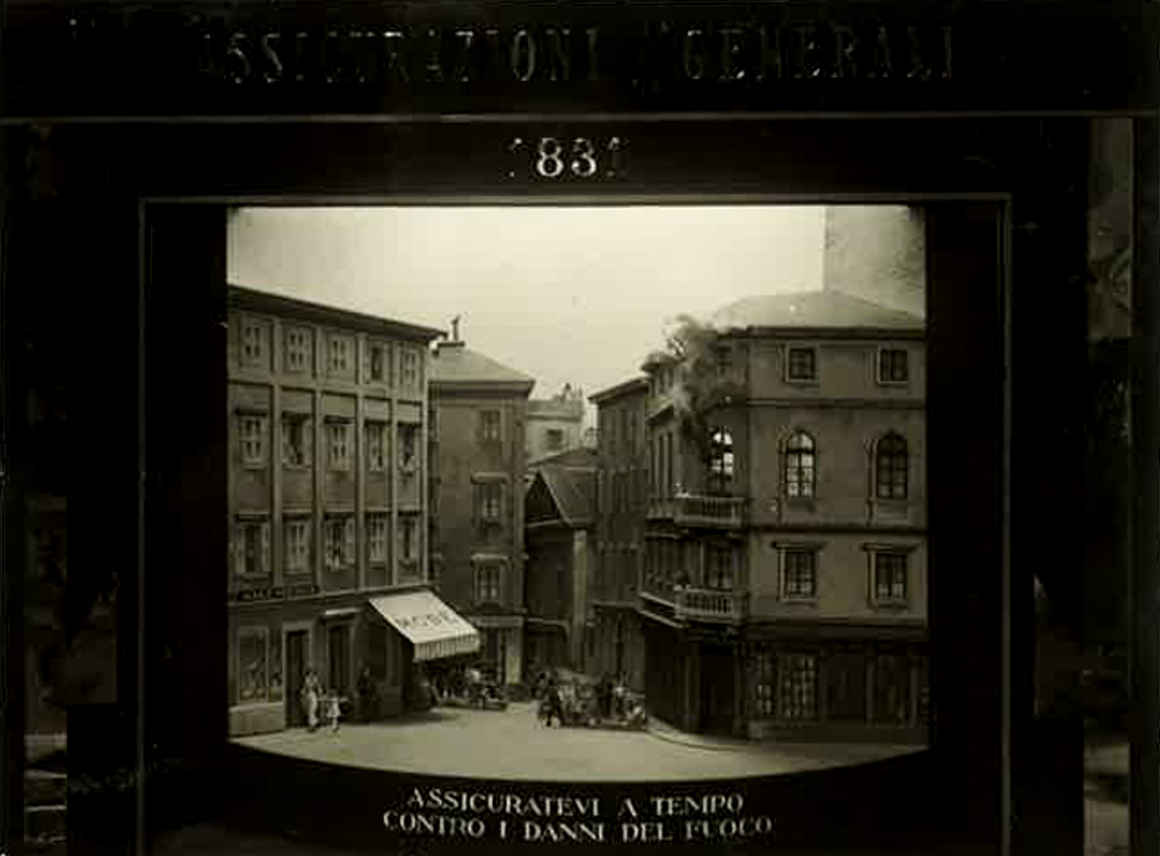 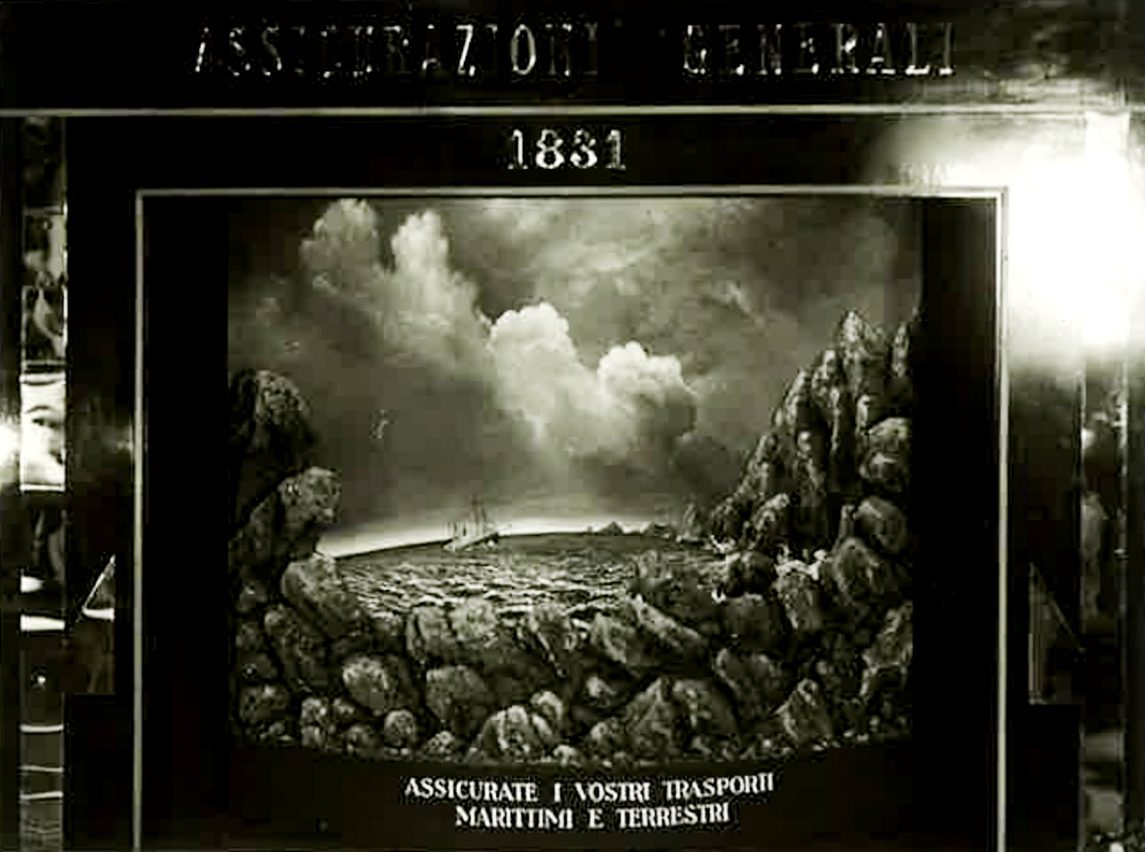 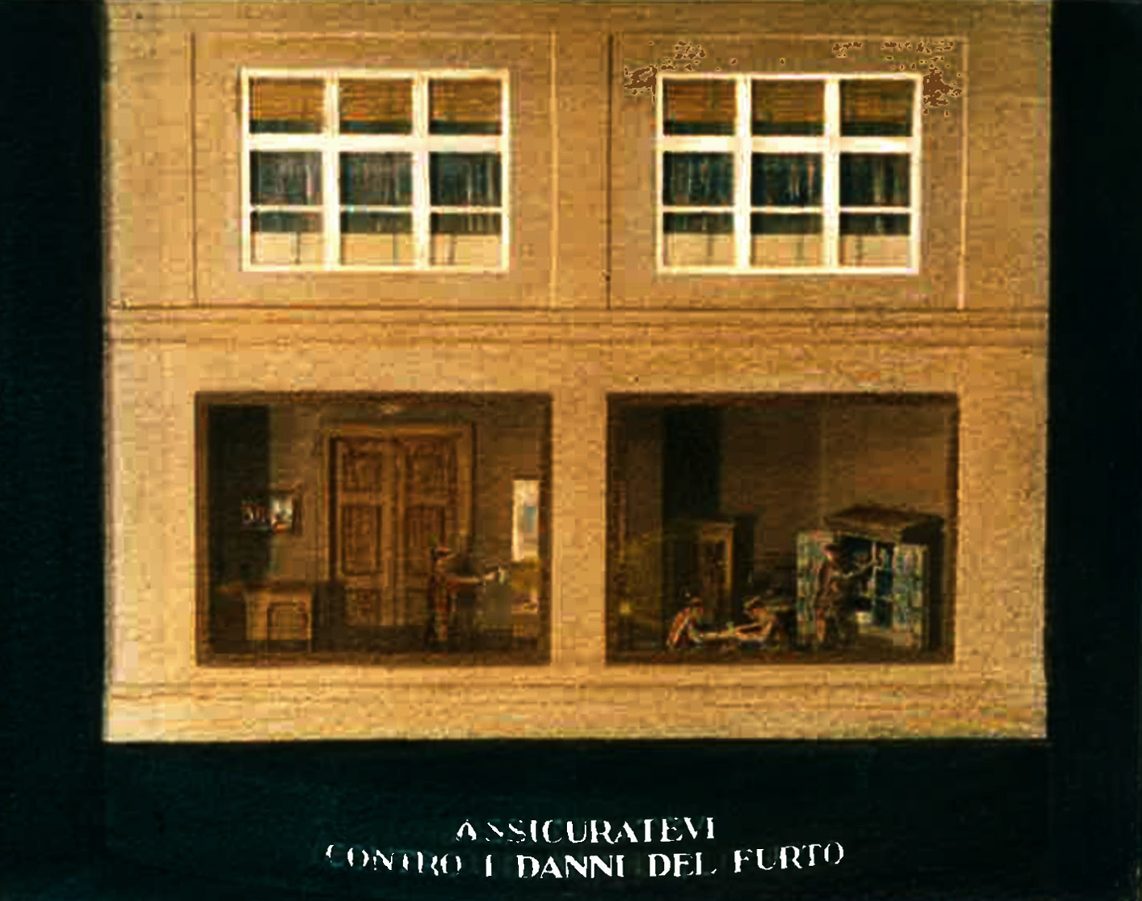 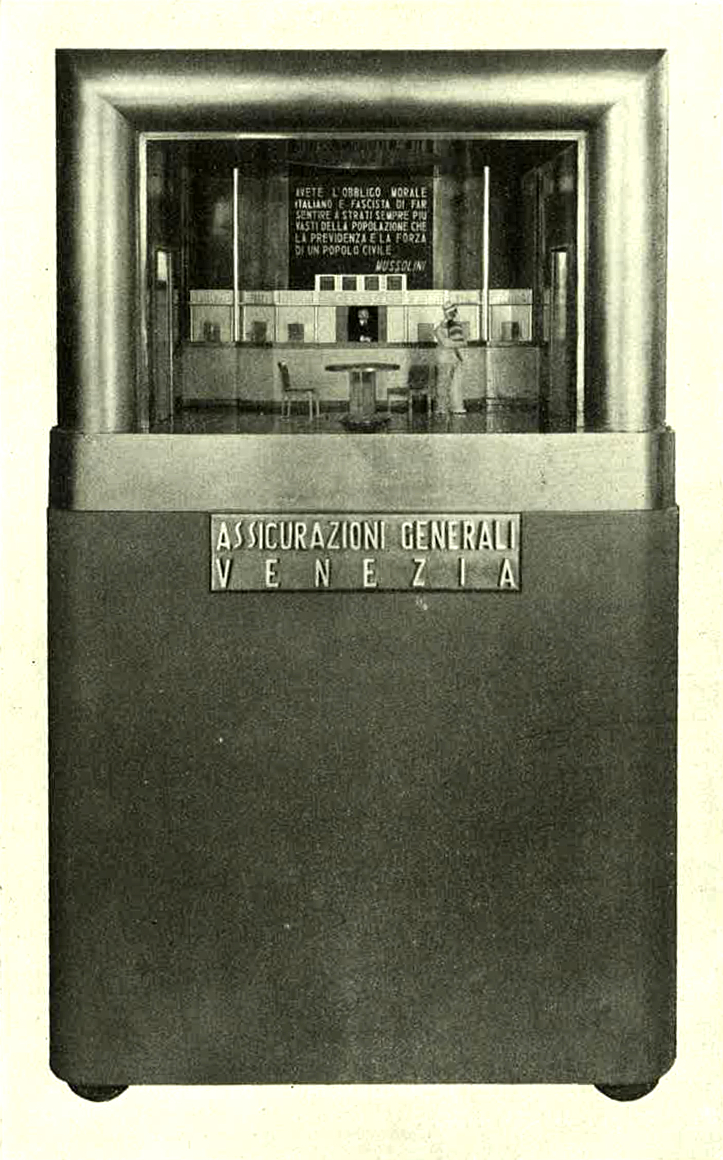 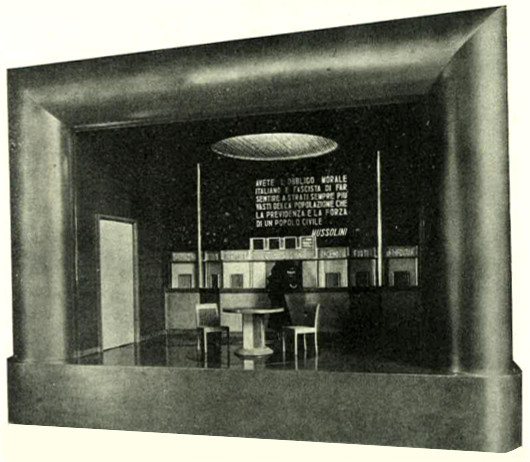 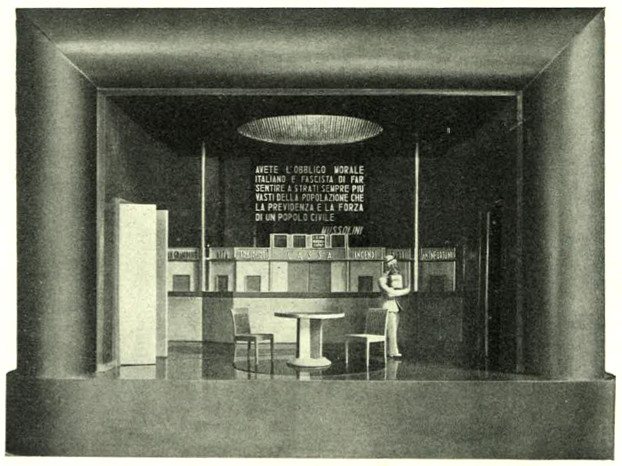 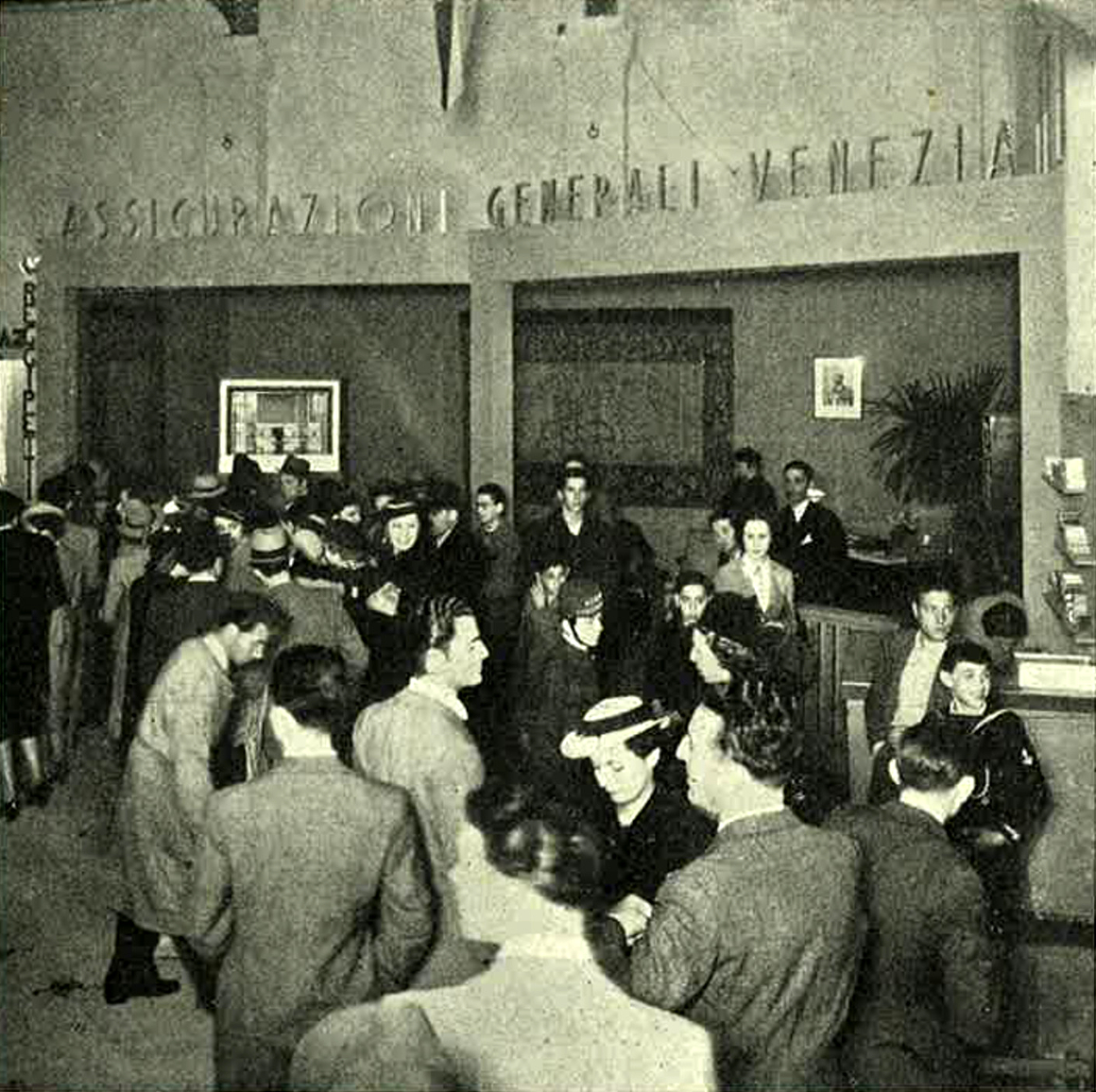 The dioramas display notable stylistic skill and a sense of perspective, but nothing to match the more futuristic and dynamic paintings promoting insurance-based saving that were described admiringly in various Bollettino articles. The first painting, which made its debut in 1933 at the Fiera del Levante in Bari, was displayed in a number of other exhibitions to enthusiastic approval from people of all ages and reproduced on the front pages of various newspapers. The scene was divided from top to bottom by the glazed frontage of a building, with six windows corresponding to the insurance branches operated by the company and its two affiliates, Anonima Infortuni and Anonima Grandine, plus a central cashier’s window. The agency offices in the foreground were separated from the public area by a wooden bench of light walnut. The ceiling contained a crystal chandelier lit up by light bulbs. Two doors, for entry and exit, were present at the sides of the scene, which was painted in red lacquer and embellished with a large gold-plated frame. Characters representing various aspects of life assurance and demonstrating its economic and social importance moved across the scene, powered by an electrical device created by Giuseppe Sprigolo and Emilio Di Marzio. To promote the idea of saving, this curious little piece of theatre portrayed someone taking out insurance while young and reaping the benefits in his later years. Another scene, promoting social welfare, showed a person buying a life policy, followed by a widow receiving benefits to provide for her children.

Unfortunately, nothing described above has been preserved… and so? As Generali employee and Venetian poet Umberto Foà urged in a little dialect poem: “Vardè sto spetacolo e dopo andè via e a farve una poliza corè a l’Agenzia! [Look at this display and then be off to the Agency to take out a policy!]”.