The People in Animation 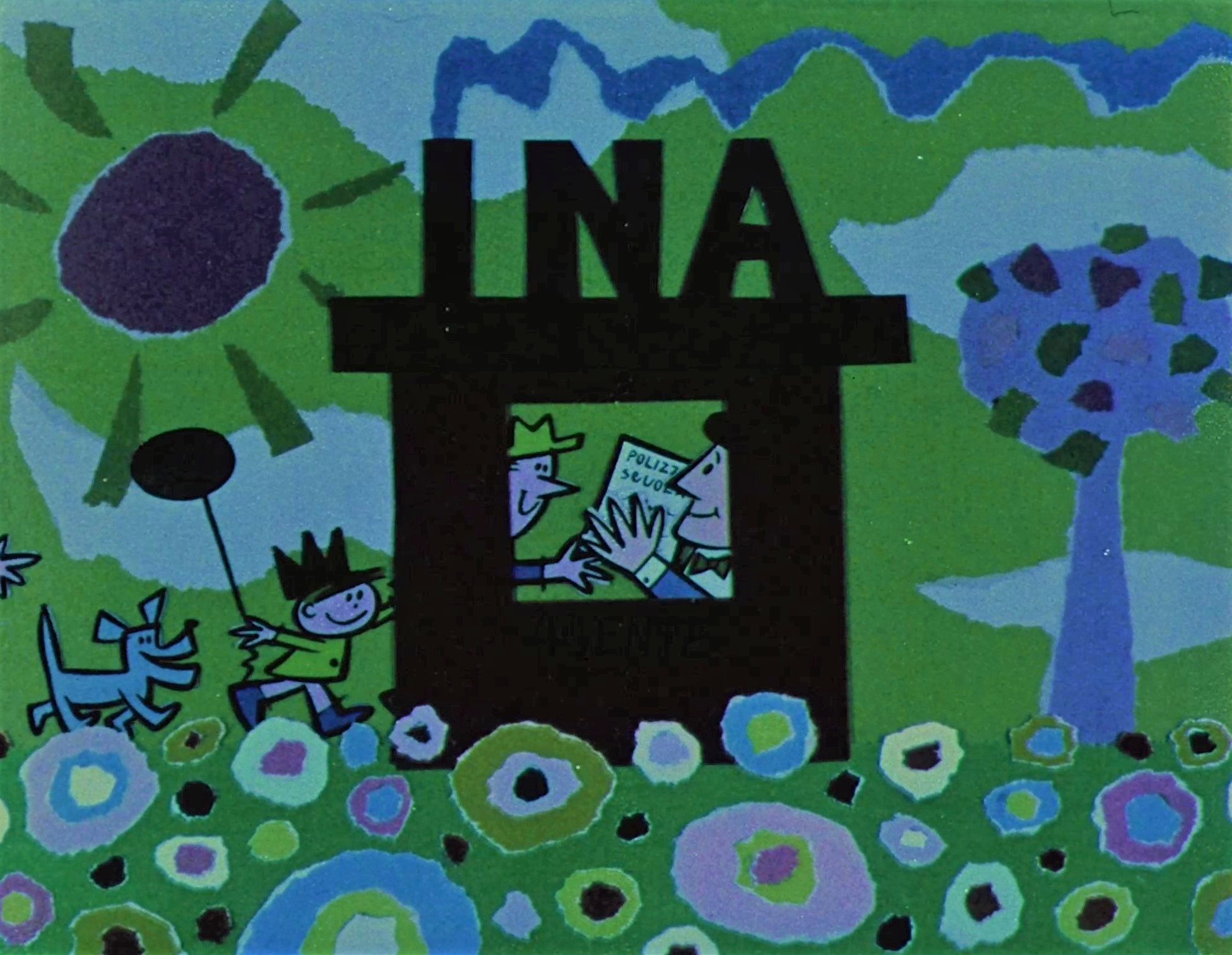 Two short cartoons to celebrate the 50th birthday (1963) of the Istituto Nazionale delle Assicurazioni (INA), entitled Io Voglio (“I Want”) and Una famiglia tranquilla (“A Relaxed Family”). These were part of an advertising campaign for television created by the INA to publicise the launch of two new products.

The advertising cartoon had already been in use for more than two decades in the United States, where insurance companies had been quick to grasp the value of cinema as an extraordinary means of introducing the public to a product, in all ways equal to that of the press.

These two short films in colour were produced by Cartoons Film (a Milanese animation studio that produced many advertisements and sketches for Carosello (an Italian television program that ran from 1957-1977) together with the cartoonists Harry Hess and Giulio Cingoli. Cingoli was renowned throughout Italy in the sixties as a particularly brilliant and innovative animator for cinema and television. His fame also extended overseas, both as a director and producer. He was remembered by the nickname given to him by his colleagues, “pupazzettaro” (loosely: “the figurine-man”). The two cartoons emphasise the importance and benefits of signing up for a personal and individual insurance plan. While the adverts may be considered slightly drawn-out by today’s standards (each one is over three minutes in length), the issues they address are as relevant now as they were then. In both, the images blend in with reworked photography, while a male voice in the background guides the viewers through a cinematic storyline that concludes with the timeless invitation to sign up for the policy at one of INA’s offices in the capital of every province in Italy.

The INA relied on cinematographic animation to advertise two popular policies, both among the Institute’s flagship products, with affordable premiums, state-backed policies, and premiums and capital safe from forfeiture. Both films take the shape of brief lessons in insurance wisdom.

Io Voglio deals with education insurance, safeguarding children’s future through school and university. The cartoon was created with the youngest audience in mind and works on basic messages, but the target audience remains adults. As the two protagonists point out, the educational pathway to training as an engineer or nurse (in the early 1960s, when further education was still inaccessible to many) came at a price: and that is where the INA’s policy stepped in.

At the IX International Advertising Film Festival, held in Venice in June 1962, Io Voglio received widespread public approval – so much so that the American president of the jury asked for a copy of the film so that he could screen it in the United States. The Cineteca del Film Pubblicitario Italiano (Italian Advertising Film Archive) in Milan chose the film as an educational tool for courses at the Scuola Italiana di Pubblicità (Italian School of Advertising). Advertising Age, an American trade magazine, also asked for permission to publish several stills from the film.

Una famiglia tranquilla, the second film, introduced the work and family policy, created for the head of the household, to reduce their concerns surrounding old age or sickness. The personal INA policy was fully integrated with the state’s welfare provisions, protecting the worker from accidents (represented in the film by threatening question marks).

These short clips are part of the Generali Group’s audiovisual patrimony, some of which is undergoing digitalisation as we speak. They offer an essential glimpse into the social fabric of our country, through a cross-section of historical events that highlight the relationships between the state, business owners and employees. At the same time, they are also an invaluable historical artefact of insurance marketing. Through its cartoons, the INA was able to speak to people directly in the comfort of their own homes via their televisions, choosing effective images and texts and demonstrating the ability to keep abreast of the necessities and aspirations of the time, while once more being able to grasp the needs of the policyholders in every aspect of their lives.